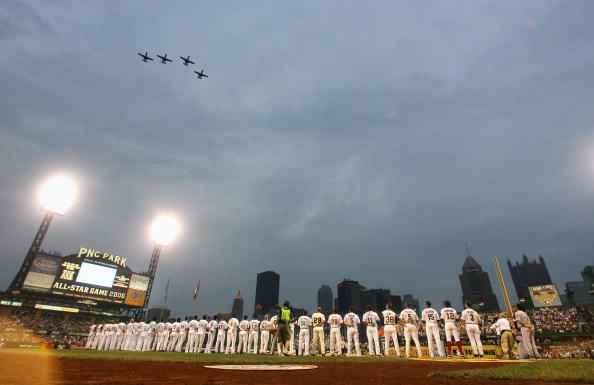 I am a sports fan and, like many other sports fans, I like to imagine super teams. Not Warriors super teams, but like “what if Steph, Klay, KD, LeBron, and Anthony Davis were all on the same team?” super teams. I feel like we all have a lot fun envisioning these kind of unbeatable All-Star squads. So I am releasing my All-MLB team, because some of these players are already on their way out or will be shortly.

This team is not the nine best players of all-time or the nine players I like the most. This is my dream team. The players I have seen in my life, several live (thanks Dad), that were just better than everyone else around them. I’ll share each player by numerical placement on the field and give a little explanation.

1. Pitcher – Clayton Kershaw
This one is easy. It does not matter what you say about his postseason record — he’s only had three bad series, if we are being fair — and he’s unworldly in the regular season. Give me Clayton Kershaw. He’s the best pitcher in the bigs, period. Madison Bumgarner, the next most accomplished pitcher under 30 in the MLB, has a career Wins Above Replacement (WAR) slightly over 20. That is impressive in its own right, but Kershaw has a career WAR of 47, in just one more season of service time. There is no comparison you can make to Kershaw from his generation. He is baseball LeBron. So now to who he is throwing to…

2. Catcher – Yadier Molina
This one is more up for debate than the rest. I, myself, am not truly sold on Molina as an all-time great. Buster Posey, Joe Mauer, Jonathan Lucroy, Matt Wieters and Salvador Perez are all super talented guys and there is an argument to be made that they are all more offensively-gifted than Molina, but that does not tell the whole story. Coaches, infielders and especially pitchers will tell you just how valuable a great defensive catcher is. That’s where Molina steps in. No one is better at calling a game, being a wall for wild pitchers, and shutting down an opposing running game like the Cardinals’ long time backstop. This might be the weakest offensive player in the lineup, but he stacks up as well as anyone.

3. First Base – Albert Pujols (I’m still not confident how to pronounce it)
Pujols is awful right now. He is batting .258 over his last four seasons. He can still hit for respectable power numbers, but he is diminished. That’s what makes him incredible. His first 10 MLB seasons he batted at least .312, hit at least 32 home runs, and played in minimum of 143 games. Remember, those are his lowest numbers of the first decade of his career and he won the NL MVP three times during that span. There’s no one who was better from 2001-2010. It is hard to imagine if you watch him play now, but Pujols was the man of the 2000s.

4. Second – Robinson Cano
This is a generally weak position. Elite athletes play shortstop and elite arms play third. If you are neither, you end up at second. They typically are not great hitters either. Enter exception: Robinson Cano. Cano is a plus-defender and an unusually great bat at second base. Cano is most notable for “looking like a ballplayer”. Nothing to do with his physical features, but it defines how easy everything looks for him. In the same way that Aaron Rodgers plays like a robot that was programmed to play quarterback, Robinson Cano looks like he should be taking swings in a professional batting cage and turning double plays. Cano barely edges out Chase Utley here. It is still fun to watch him play.

5. Third – Miguel Cabrera
This one may come as a surprise to some, but it has to do with how I am labeling players. Cabrera is an unbelievable hitter that his been kind of out shined because of the Tigers struggles. To keep it short, Cabrera has been on an MVP ballot every season of his career, including when he played barely half of a season his rookie year. He has been impressive every year of his career, even if his defense if poor.

6. Shortstop – Alex Rodriguez
I get it. Derek Jeter won more, never cheated the game, and Alex moved to third when he joined Jeter in the Yankees. So what? There is not a single, honest, knowledgeable baseball fan that would tell you Derek Jeter was a better player than Rodriguez and he was never as good at short either. Jeter has five gold gloves, but only three seasons with a positive defensive WAR. Rodriguez recorded eight such seasons before he joined the Yankees, all at short. From a baseball perspective, there is no comparison. Alex Rodriguez is one of a handful of middle infielders with a career WAR over 110; a list that has less 20 names on it overall. A-Rod is my shortstop and he would be even if I hated him.

7. Left Field – Barry Bonds
This one needs the least discussion. Despite the fact that we cannot prove he used HGH, though he probably did, Bonds is one of ten best players ever. I do not have to make an argument for him. His legacy speaks for itself. I never saw him at his MVP level, but even on his retirement tour he was special. I remember watching him break the home run record as a 10-year old. That was special enough.

8. Center Field – Mike Trout
Easily the youngest player on this list and also won of the least controversial. Trout, while boring, is really good at everything baseball. He is not just a 5-tool player, he is the one of the best at all of them. He has already compiled one of the most impressive resumes of the “post-steroid” era of baseball and he turned 25 a couple of days ago. Like Bonds, Kershaw, and Rodriguez, to nitpick at his abilities is to be a true hater. He is good at what he does. There is no better center fielder.

9. Right Field – Ichiro Suzuki
With the most distinguished first name in baseball, Ichiro is an elite player. He has one bad offensive season in his career and he was 41 by the time that happened. He’s also a well-rounded player and a hilarious personality. If this YouTube video does not convince you, nothing will:


Ichiro rocks. I hope he does movies when it’s all said and done. He is bilingual and reportedly cusses in Spanish quite regularly. There are other people who could be your corner outfielder, but not mine.

So I ask you, what does your dream MLB team look like? Similar to mine with a few minor changes? Or would you completely change half of my lineup? Let me know via twitter, Facebook, or comments!
PS: Your team cannot beat mine.

2 thoughts on “My All-MLB Team”