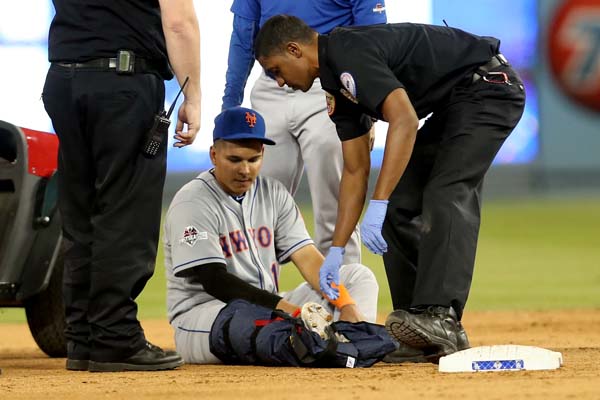 Late Saturday night as the Los Angeles Dodgers and the New York Mets wrapped up Game 2 in Los Angeles, there was a very controversial play involving Dodgers second basemen Chase Utley and Mets shortstop Reuben Tejada. You can see the play below and judge for yourself.

To the casual fan it may be found shocking that such a violent and blatantly non-baseball action could still be considered “a part of the game”, but baseball historians would have you believe that is how it has always been so that is how it should always be. I am here to tell you that they are wrong. Yes, it has been a part of the game for a long time; however, there is no way it should remain one. This is just another example baseball being behind the times. From steroids, to sports-gambling, and even domestic violence, baseball has often taken too long to react. The MLB knows what happened Saturday has no positive contribution to the game, Chase Utley exited the base path and slid into a defenseless player. Reuben Tejada was not facing Utley, was not in his way, and had no chance to brace himself for another grown man throwing his body into his legs to “break up the double play”. This should have resulted in Chase Utley’s immediate ejection. In the NBA and NFL hitting a defenseless player results in a punishment, why not baseball? Do not get me wrong, players sliding into second base when there is a legitimate play and incidentally sliding through a player is a part of baseball. This is not one of those situations though. Chase Utley broke a player’s leg and could have done worse. I am not saying Chase Utley is a dirty player, but the MLB’s loosely written rules on this type of play allow for too much gray area. I do not see a way any one could explain this as a part of baseball or even close. I also wonder if this play was gruesome enough for fans to push for change. What if this were to happen Carlos Correa or Troy Tulowitzki? Sadly, I hope this play is enough incentive for the MLB to take a look at these types of plays. I would hate to see baseball lose more young stars when it could easily be avoided.